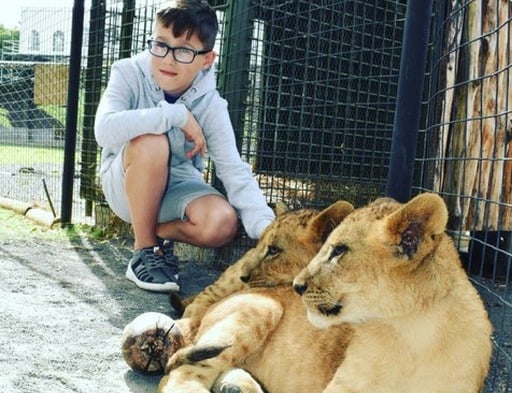 Have you ever dreamt of walking with lions? Well no I hadn’t either, in fact, I didn’t even know this would be possible before we went to Mauritius Casela.

Casela Mauritius is an absolute must if you are visiting Mauritius with the family. We had such a great day, seeing the big cats and having a tour.

Things to Do in Mauritius Casela

Yes I know this sounds absolutely bonkers, but its true. At Casela Safari Park there are people walking with lions. You have to be 15 or over though so we didn’t as Freddie is only 8, but it still amazes me that this is possible! What amazed me the most was there were no guns in sight! All the guards had were sticks!

This also sounds pretty ridiculous, but at Casela Safari Park Freddie actually played with lion cubs! It was such an experience.

You have to be over 5 years old to do play with lion cubs, as long as you are accompanied by an adult.

There were 6 lion cubs in the enclosure and of course Stuart went in with him (I was too chicken!!!). The cubs were only 6 weeks old but they were already the size of a small dog.

When they went in to the enclosure there was three staff plus a photographer, so watching from behind the fence I was fairly calm!

Lion and Tiger Drive Through

This we did as a family (mainly as the vehicle had an electric wire all the way round and was fairly safe!) but this was also fantastic.

While we waited to get in the vehicle there was lots of information about the big cats.

There was a driver, someone who opened the gates plus a tour guide. The tour guide was fantastic and made the 45 minute long drive really interesting and he was very knowledgeable about the tigers and lions.

The gates to start the safari looked very much like the gates to Jurassic Park, which was a little scary!

But it was fantastic, we saw a lot of lions both male and female.

Tigers however, are our favourites and these were not disappointing. The tigers were definitely  not as friendly as the lions and at any opportunity one of them would try and bite through the tyres.

Would I recommend Casela Nature Park ?

I would highly recommend taking a trip to Casela Safari Park Mauritius. There is so much to do, even if you don’t see the big cats. In fact it is so big we missed the free safari ride!

If you are travelling to Mauritius with the family check out my top 20 travel essentials.

Have you ever dreamt of walking with lions? Would you be brave enough? Let me know in the comments below.

Last Updated on 4 November 2021 by homeschoolof1